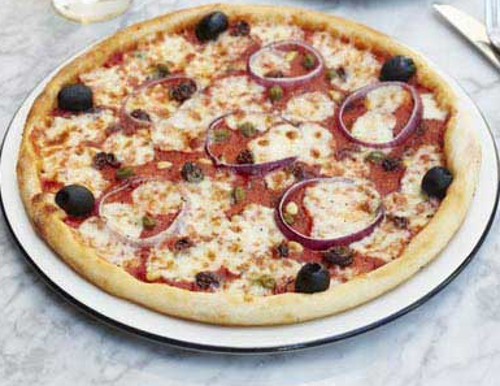 Pizza Express Veneziana Pizza Review
The lads had been dragged out again by the wives to the out of town shopping complex but the saving grace is that we know it has a pizza express, so all we need to do is slip off for an hour or so. So when they were trying on the 50th dress of the day we managed to disappear .

We wanted we try something different and the Veneziana certainly fitted the bill though we were a bit suspect of some of the ingredients being the meat and cheese freaks we are. Service was a bit slow but we have had worse and at least it was nice and hot and looked good. The classic base was the standard fair, slightly soft and sloppy, but very acceptable. Sauce was very nice with a rich deep taste . Mozzarella was reasonably thick with a good toasting on top and was delicious as always. Onto the the ingredients, gulp… The pine nuts were Crunchy yet butter textured, pleasantly sweet and were a real revelation on a pizza. The capers had a slight vinegar flavour but marginally salty with it (not our cup of tea).

The olives were salty with a bitter oily palette. The sultanas offset and contrasted the pine nuts and capers and were a welcome addition with a juicy texture. It was rounded off with red onions but we felt this was more for appearance sake than adding to the taste and we felt they were out of place on this combo. So all in all it was a very different Mediterranean inspired offering. We have to say we would not order this normally but different we wanted and that is what we got! We got back the clothes shop just as the 78th dress was being tried on… Arrghhhh!

An “okay” from The Pizza Lads