The Mexican Pizza from Papa John’s 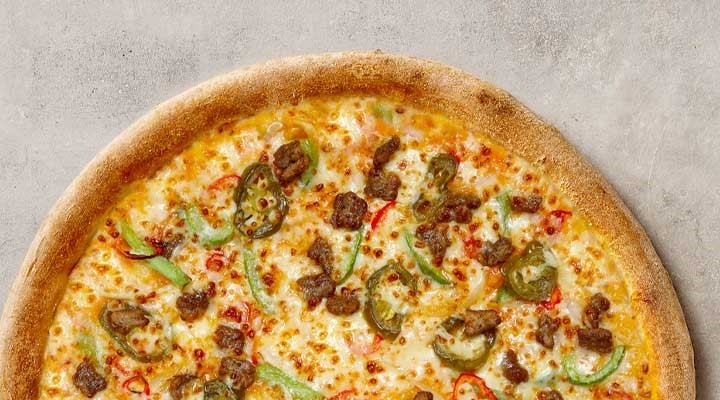 What they say
Our tomato sauce with mozzarella, spicy beef, jalapeño peppers, green peppers, sliced onions and a sprinkling of red chilli peppers

What we say
The lads were craving a hot and spicy pizza and we figured the Mexican from Papa Johns would fit the bill, we ordered the standard base version and we didn’t have to wait long for it to arrive.

The pizza in our opinion looked a bit sparse when it came to the topping to base ratio so not a promising starting point. Fortunately it was good and hot, the base was nicely crusted on the edges and not too sloppy or hard, it tasted just fine.

Tomato sauce was good enough without being prominent in the overall mix. Mozzarella was fairly liberally spread and toasted to perfection, stringy enough when being eaten without coating the lads laps in cheese. Spicy beef was seasoned nicely with a lovely chilli kick but there could have more of it. A few jalapeños were in evidence which were good but again thinly spread. Some green pepper pieces added a succulent contrast. The onions were sharp tasting which the lads felt added greatly to the overall offering. Finally the red chilli peppers were powerful and the crowning glory on any mexican themed pizza. There we have it, it was hot and spicy so we appreciate that, everything was fine apart from the lack of toppings.

So all in all an okay pizza, though perhaps we were just unlucky on this occasion, we cant recommend it wholeheartedly.