The Cheeseburger Pizza from Domino’s 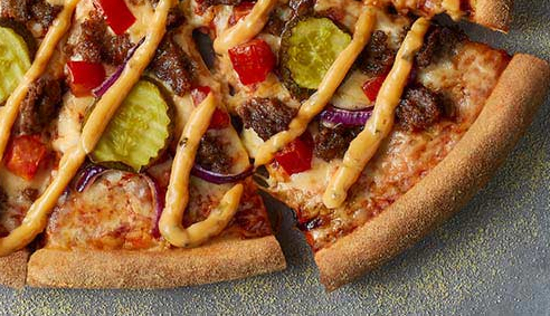 The Cheeseburger Pizza From Domino’s Review

The mind-blowing delicious mash-up comes packed with all the hallmarks of a signature cheeseburger including 100% mozzarella cheese, double ground beef, fresh tomato, onions, gherkins and Domino’s vine ripened tomato sauce.
The revolutionary hybrid is then topped off with the pizzamaker’s secret burger sauce on the inimitable taste of Domino’s freshly-handmade dough, which superfans nationwide know tastes like no other.
The new fusion ‘pizza-cheeseburger-combo’ really must be tasted to be believed and whilst it may not sound like it works on paper, it most definitely works on pizza!  Or should we say Domino’s pizza?
Let’s look at those mouth-watering ingredients one last time…
Domino’s Cheeseburger Pizza Review
The Lads were keen to review the cheeseburger pizza, we seemed to have overlooked this one but had previously done a review on the Papa John’s version.
The pizza was ordered on a busy day so delivery was slightly delayed but not by too much. The pizza’s appearance was 1st class, nice contrasting colours and patterns of the toppings really got our taste buds going. As we said the pizza arrived fairly quickly so it was good and hot. The standard base was just fine and tasted fresh with a hint of outer crispness. Standard tommy sauce was no disappointment.
The cheese was liberally topped and was browned nicely on top. The Toppings were just what the lads would have chosen if this was our creation. Double ground beef was succulent and tasty and we were so glad this was the double portion otherwise it would have been far too thinly spread. Lovely Tomatoes were soft and chunky, The gerkins really lifted the pizza and we felt it gave it that big “maccy d” type taste with a hint of sweet/sourness. Onions are are a must have on a burger pizza and it was all topped off with a burger sauce, criss crossed over the top, that is supposed to be a secret recipe.
Were not denying it is, but it tastes no better or worse than most others but it’s how it combines with the rest of toppings that matters and we have to say it was fantastic combo. So all in all and we were reluctant to go for this verdict but we have to say this is one of the best pizzas we have ever eaten. Changes for us – none, it could not be bettered.
A thumbs up from the lads.
Add A Pizza Review