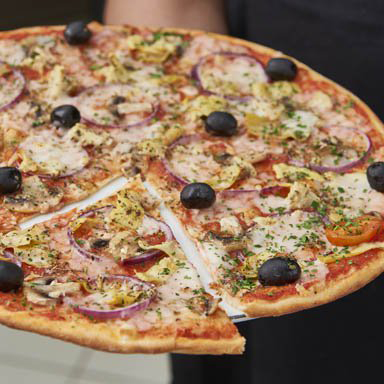 Pizza Express Vegan Giardiniera Pizza Review
Now the lads are real men cavemen meat eaters! But we are married (to our wives lol) who might have a different opinion, so on a double date we popped into pizza express. It was decided for us that a vegan pizza would be in order.

The lads weren’t sure why, but they explained to us that Sarah the new Zumba teacher was a Vegan (we could’ve guessed). So with a tear in our eyes we passed over the meat feast and double pepperoni and focused on the Vegan Giardiniera. The pizza appeared after a brief while and we got stuck in.

The base was Good of course. Toppings wise, well we could live with Mushrooms, tomato and onion. Artichoke and olives would not be top of our list, but it worked together pretty well. Our problem was with the fake mozzarella, it was to our taste a bit Grim. I suppose we could get used to it, but it didn’t float our boats. Ted said it had a funny twang. Luckily the Garlic oil hid some of the taste. So all in all, not one that we would be getting again. Even the wives didn’t argue with that!

A thumbs up from The Pizza Lads if you like that sort of thing…..