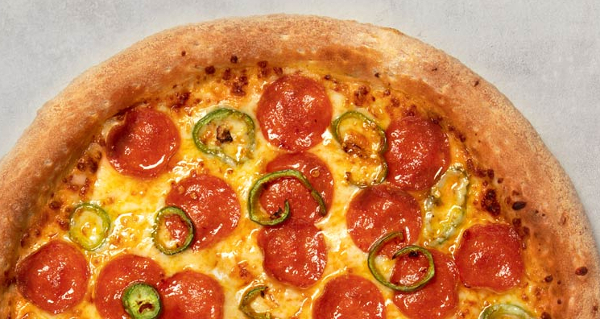 Hot yellow Amarillo chilli base with our signature spicy pepperoni, mozzarella, fresh green chilli, and a sweet wild flower honey drizzle. Can you handle the sting? Available for a limited time only, grab one before they buzz off.
Papa John’s Bee Sting Pizza Review
Everyone knows the Lads like a good hot and spicy pizza and when we saw that papas do a new one called the Bee Sting we both agreed that is the one for us, the hotter the better. In fact it’s a pity they don’t offer vindaloo pizzas as the lads have been known to partake in the odd curry now and again as our missuses will testify (much to their disgust, but hey an industrial plunger usually solves the problem ), Anyway nuff said about that!
So onto the pizza we piled over to the local outlet and were soon back in our gaff eager in anticipation. The pizza was nice and warm but we had legged it home pretty quickly. It looked much like a standard pepperoni but maybe the secret is in the sauce? The base was standard fare with a nice crispy edge and tasted fresh enough. The sauce was Amarillo chilli they say, we googled Amarillo and it seems it’s some sort of peruvian chilli, the colour is very yellow a bit like mustard and is full-flavored with plenty of heat but not scorchingly hot. It seemed to seep through the cheese which we liked.
The pepperoni was standard but nice quality and not too grease. it was sprinkled with fresh green chillies and while these were strong we felt a few more would have been nice. It then drizzled with a sweet wild flower honey sauce , a bit of a gimmick to tie in with the bee type theme , it was ok but added little to pizza overall. So as a combo we quite liked it, it was good and powerful stuff and it’s fair to say our mouths were on fire and tongues numb for a bit. So a thumbs up from the lads but no plungers required this time , perhaps they could offer the chilli sauce on a permanent basis for the guys fed up with the usual tomato sauce which would be a nice alternative.
A Thumbs up from The Pizza Lads
Submit a Review on this Pizza