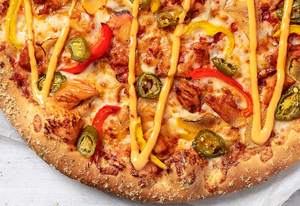 Pizza Hut Buffalo Chicken Pizza Review
The lads were hot (as always) and looking for a summer menu pizza to cool things down. As Ted says that people in hot countries always eat hot and spicy things, then that’s the way to go. We happened past Pizzahut and noticed that the new menu included the Buffalo Chicken Pizza + Jalapenos Pizza, That’s defo the one for the lads.

We ordered it on a classic crust base and when we got our hands on the pizza (or at least our eyes) it looked a bit lame but don’t judge a book by it’s cover we say. The base was thin and fairly crispy but hot and tasty with a hint of garlic. The Tomato sauce was fairly thinly spread and we could’ve done with a bit more but it was rich and indulgent. Mozzarella Cheese was present and correct.

Buffalo chicken was tender but once again we felt the portion was a bit stingy, but hey we are fairly greedy guys as our wives will testify. Taste wise it was reasonably hot and powerful . Scattered around were Roasted Onions & Peppers which was a more generous helping as is always the case with the “cheaper ingredients”, having said that a pizza always benefits from peppers and to a degree onions and no exception here they really lifted the pizza combo.

Our biggest gripe was with the Jalapenos and we agreed they were shrivelled up and tough and we felt that they had either been cooked too much or were not as fresh as they could have been. It was drizzled with a Chipotle Mayo Drizzle sauce which while looking nice was not something we would have had by choice as it added little to the combo. So all in all a reasonable all around pizza let down mostly by the Jalapenos.

So the Pizza Lads decided on a reasonable thumbs up.