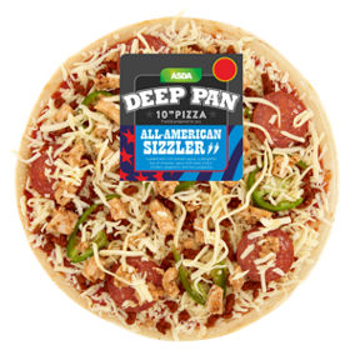 The lads had been sent shopping by the missuses and were determined to get a pizza for themselves, now the lads had had some disappointing experiences with pre packed pizzas so spotting the pizza counter at Asda supermarket we decided that was something we had to try. The front of the counter was packed with newly made pizzas or we could make our own creation, we decided on a pre done one and went for the American Sizzler Deep Pan 10″ which was a reasonable price and to be honest probably use the same pre packed toppings as the big chains. So upon arrival back home on went the oven.

When cooked the appearance was pleasing with a decent covering of toppings. The base was reasonably thick and was fairly light with just a slightly crusty outside. The tomato sauce was nice and tasty and spread evenly. Cheese was standard fare but not too generous, still it wasn’t a disappointment. Toppings were spicy chilli beef and that was tender and meaty with a fiery taste,  kickin’ chicken had a punch and was tender, pepperoni was a bit sparse (we have heard that the toppings are literally counted and we wouldn’t be surprised) but good and tender and it was rounded off with a handful of jalapenos and a sprinkling of cheese on top.

The overall offering was a good combination and we had to admit that we had not had many pizzas that were more fiery. The quality was on a pare with a chain one and in our opinion was far better than chilled pre packed ones. We were pleasantly surprised and will be reviewing more in the future.