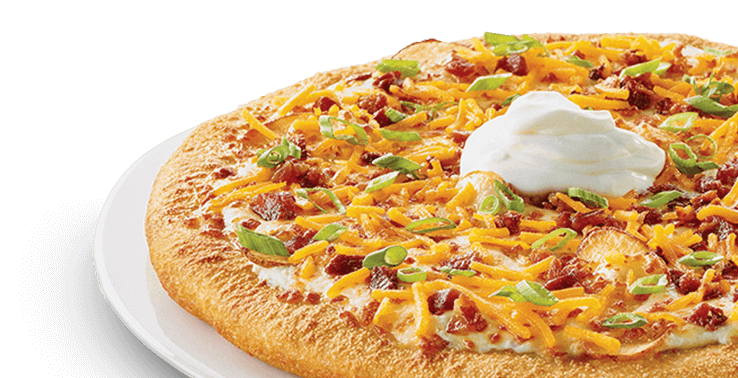 Sour cream, bacon, Cactus Cut Potatoes, pizza mozzarella, cheddar, green onions and a dollop of sour cream. Made out of our signature hand-pressed dough and topped with gourmet ingredients, perfect to satisfy your cravings!

The lads had hopped across the border to Canada as we had heard that a Chain called Boston Pizza offers a fairly unique range of pizzas and we are all for trying new things.

The pizza we opted to get for our review was the Spicy Perogy (we’ve no idea what a perogy is). Looks wise all good with nice color and the sour cream smell really tingles the taste buds. The base seems to be a pan cooked dough made with plenty of olive oil which creates a juicy crispy crust of a decent thickness. Edges were all nice and browned, though sadly the toppings were not edge to edge. The sour cream sauce was certainly tangy and liberally applied.

The Bacon seemed to be of the canadian variety and as such was pretty lean with a ham like flavor. The Cactus cut potatoes are a Boston pizza speciality and are thinly sliced spicy fried potatoes. We really liked them having never had potatoes on pizza before we were skeptical but they really worked. The top was covered in a coarsely grated mozzarella and cheddar mix.

Finished off with some green onions which were fresh, sweet and mildly oniony and with a dollop of sour cream in the middle.