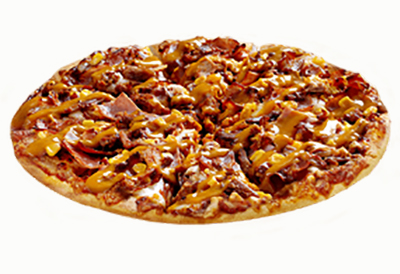 Pizza Hut South Carolina BBQ Pizza Review
The lads were looking forward to the onset of summer and so a BBQ pizza was the ideal choice to cheer us up. We had recently reviewed the domino’s BBQ, so we were hoping for a another good feast.

The Pizza Hut one was a more exotic combo than the classic version. We opted for the pan base and it was well cooked and nice and thick. The pizza looked “busy” but that’s never a bad thing as thinly topped offerings can be a let down. The pulled pork was a little chewy but had a good flavour. We are not fans of sweetcorn on pizza but it was not too prominent.

The bacon was a little too crispy for our liking though and the South Carolina BBQ drizzle was a nice touch, but seemed “lost” in the mix. Overall not too bad, but we have better. We took some home for the wives to earn a few brownie points.

A sideways thumb from The Pizza Lads