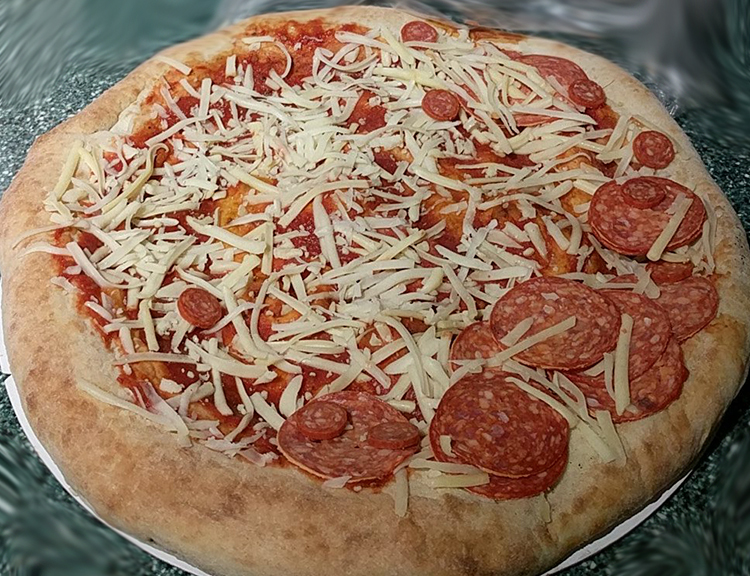 The lads were totally out of money as usual, Christmas was nearly upon us and what little money we had left had to be devoted to present buying for the missuses. We had of course left everything till the last moment and hit eBay and Amazon to order a variety of unlikely gifts in the hope they actually turned up before Christmas. Bill had gone for a toilet seat with a picture of The Pizza Lads on the lid. A watch from china costing one pound with free postage, a toilet roll with jokes on and a frying pan! Ted had gone for a giant wine glass, a barometer, a heated hair brush, anti ageing cream and a frying pan! (and say romance is not dead…!)

So fearing that this would be our last Christmas being married, we put our feet up and concentrated on solving our pizza craving with no funds, a quick look in the fridge revealed a Sainsbury’s Stuffed Crust Pepperoni Delight Pizza. It looked good so here we go.

We cooked it according to the instructions of course. Looking at the finished result and it appeared cosmetically very acceptable. The base was ultra thin and hadn’t crisped very well so seemed a bit soggy. To be honest we wondered if we lifted it up whether the entire middle would detach from the crust. The dough crust was just too stodgy for us and had been filled with the rubberyist cheese known to man, and what made it worse was that it tasted of nothing (Ted reckoned it wasn’t cheese and garlic at all). We thought there wasn’t enough cheese topping initially but it had a bit of depth to it.

The tomato sauce was quite sweet and not to our taste. The Pepperoni consisted of two types, big and small, which was reasonable and not too greasy and the amount was fairly generous. It came with a Garlic dip which was small.

So we were not overly impressed and don’t recommend this pizza. We realised that we were going to be in trouble for finishing this off as it was for the kids tea. Oh well, they’ll be pleased with the frying pans no doubt. Lets hope they don’t use them to clonk us over the head?