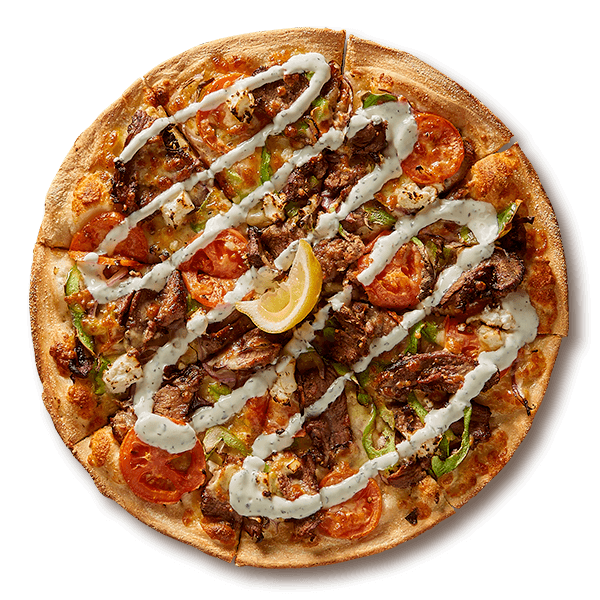 What they say
House Cooked Lamb roasted in Mediterranean spices,Tomatoes, Green Capsicum, Spanish Onions, Feta and Oregano on a Garlic Infused base, garnished with Mint Yogurt and a Lemon wedge.

What we say
The Lads were down under and just had to try an Australian type pizza. The menu options at crust were impressive to say the least , not the cheapest pizzas we’ve ever had but you get what you pay for. We decided on the Mediterranean Lamb which looks awesome and we have never had Lamb on a pizza before. Collection was painless and quick.

The look of the pizza was pretty good but didn’t look exactly like the menu pic, the yogurt dressing was not applied very artistically! We didn’t really care anyway. The base was excellent, it definitely had an artisan air about it and was just fine with nicely browned edges. The garlic infusion was not too overwhelming as the lads are not overly keen on Garlic truth be told and the Missuses are also a bit dark on it. But we have to say with Lamb as a topping it’s pretty essential really.

So how was the Lamb you ask .. It looked magnificent , juicy chunky pieces of
tender meat , taste wise it was intense with a subtle blend of herbs really bringing it to life. The tomatoes were sliced and the skins
unfortunately were a little chewy. The green capsicum peppers were mild but we felt they had slightly tough skins but not too bad at all. Spanish onions were pungent in aroma and flavor with a sweet taste.The feta cheese was salty, with a tangy flavor and goes well with the other ingredients.

Oregano was peppery and assertive, perhaps even bitter or astringent but it enlivened the other toppings. It was finished off the aforementioned Mint Yogurt which being it’s going with Lamb was perfect, very creamy. Lemon was discarded by us. So we thought it was a fantastic taste combo and Lamb on a pizza was a revelation..

Some minor disappointments but on the whole a winner