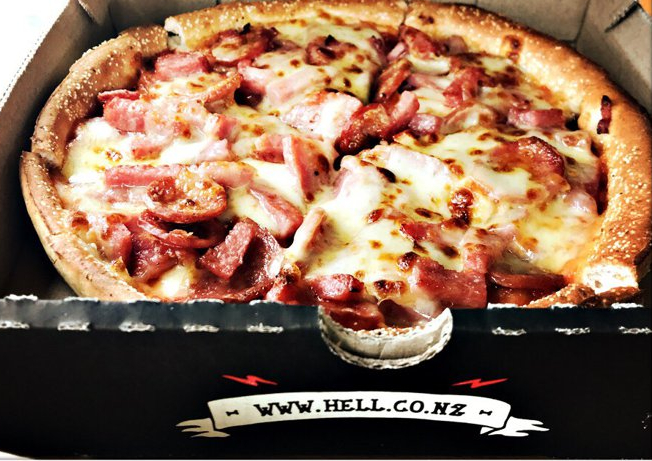 What they say
The first Cardinal Sin. We bring it to you in effigy as 5 pepper Pepperoni, Salami, Ham, Bacon & Cabanossi Chorizo, lashed with your choice of sauce, eg. BBQ, Sweet Chilli, Smokey BBQ Tomato, Honey Mustard, etc. All served on a crisp tasty pizza base topped with Hell’s special recipe Tomato base sauce, mozzarella cheese, herbs & spices.

What they say
The lads were touring New Zealand and one of the large pizza chains we discovered was Hell Pizzas. Sounds like something that couldn’t be missed.

We decided upon the Lust Pizza as the lads are always lusting for a pizza and it is a real meat lovers dream. It arrived fairly promptly and was still warm.It’s what you may call a gourmet pizza and so at premium price point. It looked a treat , with a good topping to base ratio and edge to edge toppings with a slightly upturned edge crust.

We went for the classic base which was very good, not sloppy at all but thinnish and crisp and fresh tasting to boot. We opted for the classic Tomato sauce base though there is probably the widest range of alternative sauces on offer than we have seen recently. The Sauce was pretty strong in taste for sure but obviously made using the best ingredients but not too overpowering. Mozzarella cheese was just fine, lots of it and tasty. The first of the meats is 5 pepper Pepperoni, wow that really has a kick to it, very meaty though and juicy.

Salami was chunky with a subtle herby hint. Bacon added to the pork overdose but we thought added little to the pizza as it was drowned out by the other strong flavors. Cabanossi Chorizo was strong and spicy with chilli notes and the herbs and spices really gave it all a lift.. What can we say , our eyeballs were sweating after eating this, but we have to say it all tasted fresh and was not dry in any way with all the meats being tender and juicy.

Lovely pizza,a big thumbs up from The Pizza Lads