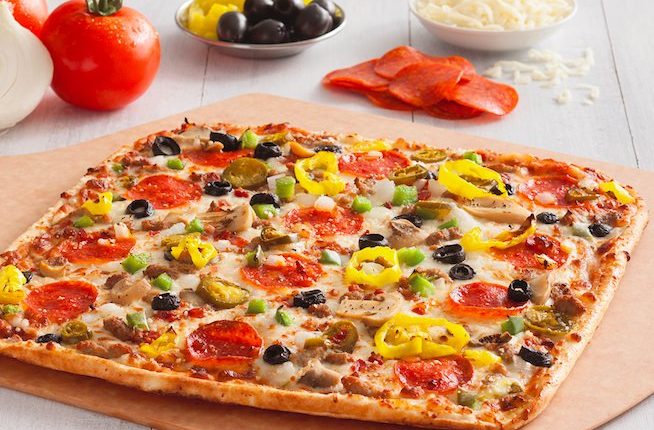 The lads love a hunt brothers pizza when we’re out on the road and need a pizza hit. One of the biggest pluses is the price which certainly puts some other chains’ offerings to shame. We stopped for Gas and quickly got the lady in the outlet to fix us up with a “loaded” pizza. The pizza was a good size, the rectangular thin crust offering and with a generous topping to base ratio, nice and colorful as well. The base was as promised nice and crispy with a reasonable taste. Signature tomato sauce is nothing to write home about but with a nice, sweet tanginess for all that.

Mozzarella cheese blend provided an adequate covering and the aged Parmesan added an intense flavor. Italian sausage was in small pieces and got lost a bit. Pepperoni was not overcooked and was decently spicy. Bacon ,again, in small chunks but the bits we found were fine and meaty. Savory beef was a bit sparse but tasty. Peppers were cut into small pieces but pleased Bill especially who adores his peppers. Nice bits of mushroom were okay with some onions for flavor.

Black olives were a bust for Ted (he hates em) but some people love em of course (strange people he says).The Intriguing banana peppers were mild and tangy with some jalapenos that were like a smack in the mouth when eaten. The combo as a whole worked nicely with all sorts of contrasting flavors vying for attention. Most of the toppings are probably pre packed but hey for the price you can’t go wrong dudes.