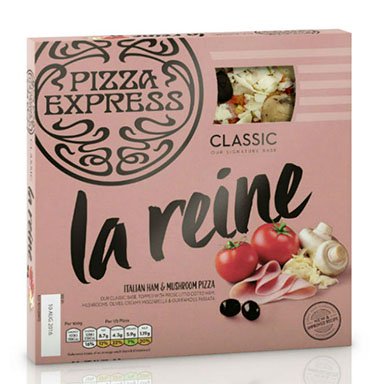 Pizza Express La Reine Pizza Review
The lads had noticed that Pizza express do a range of cook at home pizzas and we were keen to try one to see if we could recreate that restaurant experience in our humble little abode.

We chose the La Reine Classic which is basically a ham and mushroom pizza which is never a bad thing. It cost about a fiver so obviously much cheaper than eating in house. When were moved the packaging it looked pretty good and the toppings were at least a fairly good covering. The cooking instructions say to Drizzle a little olive oil over your pizza to give it a crispier finish, and who are we to argue, so out came the extra extra virgin stuff that the missus had purchased and never used and splashed it over a bit.

So after the cooking time had completed we settled down for our feast and to fair it looked a treat. The base was a bit too crispy on the bottom as is so often the case when cooking pizzas in home ovens even though we had followed the instructions to the letter. However it wasn’t rock hard so we could live with it. The dough was OK but didn’t taste as fresh as we would have liked and felt a bit slimy on the tongue. On to the toppings then… The passata was decent proportioned and had a deep rich taste. The cheese was indeed creamy and had toasted well. The mushrooms were of a decent quality and were juicy and tasty. The Prosciutto cotto ham was delicately flavored, dry cured and had all the flavour we expected. A few olives were scattered about to little effect as they lacked that pungent bite.

So what was our verdict? Well Ted said that it was little better than a standard supermarket own brand offering and Bill reckoned it was nowhere near restaurant quality.

A six out of ten from The Pizza Lads