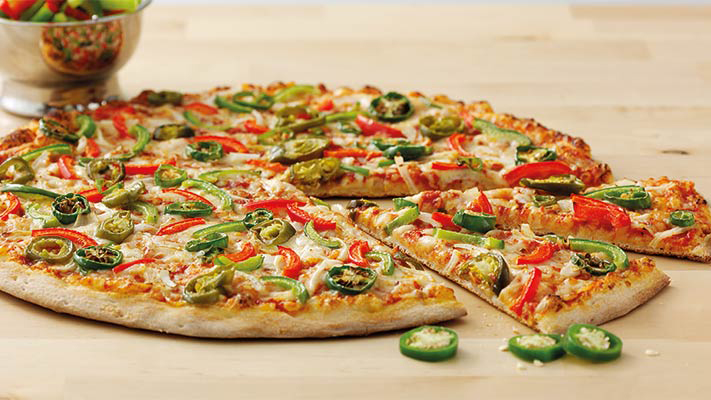 Four different peppers on a pizza? Now that’s a real passion for peppers. Trust Papa John to load a pizza with colourful red and green peppers, fiery green chilli peppers, spicy jalapeno peppers and finally… freshly sliced onions. This pizza is not called hot for nothing.

Papa John’s Hot Peppers Passion Pizza Review
Now our other halves had been droning on about turning veggie for a while. We had no idea why but reckon it must have been something that they had heard said on the “Loose Woman” TV show about detoxing the bowels or something (never before had the show been more aptly named.. ha ha)

Anyway we had been brainwashed so when we stumbled zombiefied into Papa John’s, the only thought we had was veggie pizza. The hot pepper passion caught our eye and it sounded good. We went with medium deep crust on this occasion, the base was all great, a nice crispy crust and soft inside. The cheese / sauce checked out.

The pizza overall had a mighty kick to it and the chillies and jalapenos really set us on fire and the peppers and onions didn’t put it out! Nothing too much to go wrong with these toppings, they were juicy and cooked well. All in all we liked it, but beware if you are not used to hot chillies etc.