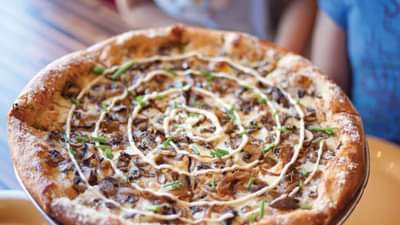 Holy Shiitaki pizza Batman, What kind of fiendish villains can come up with such a deviously inspired combo to take over the world!

It’s a combo conundrum Robin , we have to get the Pizza lads to investigate…

So the lads are tasked with finding out ,and we are always happy to help out our favorite superheroes. The pizza joint was fairly quiet when we went and so we didn’t have to wait long. Looks wise it was impressive with the lovely swirl appearance.

The base was quite an offering, a thick old lump of fairly dense dough with edges that were a bit overcooked and crusty with a faintly sweet yeasty taste which was OK.The garlic sauce was a little oily but not unpleasant. The cheese mix was mozzarella and Wisconsin aged white cheddar which was a succulent triumphant mix and one that other pizza chains would do well to look at having.

Shiitake, button and portobello mushrooms are of course the stars of the show, which are prominently tasty with a soft oily bite to them as if pan fried. Lovely. Caramelized onions added that contrast of sweetness with a garlic aioli swirl garnish was not at all runny but thick and pungent. A bit of black truffle oil didn’t do that much overall, and fresh chives and shaved parmesan were a nice touch to finish things off.

So as a whole it did work, the base was a bit disappointing but the combo of toppings shone through and for a non meat option it was a good choice, but Batman and Robin need not worry this won’t be taking over the world, However, it was nice enough.