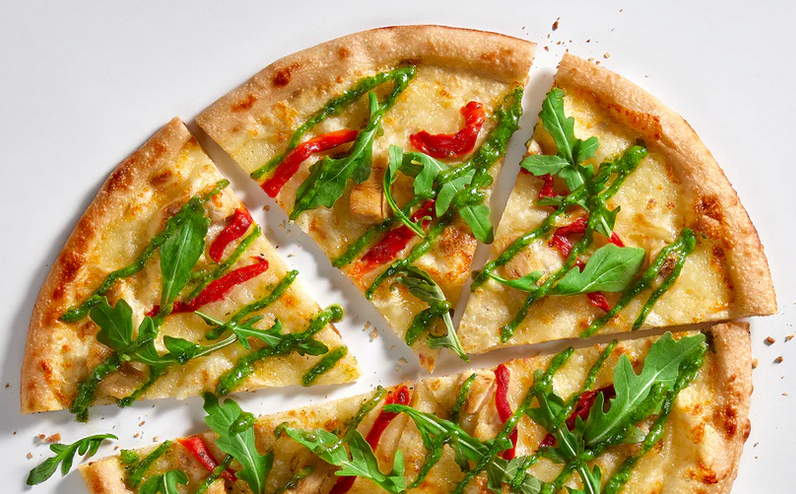 This isn’t a new pizza combo but we haven’t visited a Blaze Pizza before, they specialize in creating personalized pizzas made to order but as always we went for a standard option. The one we decided upon was the Green Stripe.

The pizza arrived within about three minutes flat which means they have some pretty heavy duty ovens in operation, also the crust is very thin and cooks quickly. It looked like they had emptied a garden worth of greens on the top, certainly different. Smell wise it was very Italian (if such a smell exists) .The base as we say was very thin and quite crispy and even a little burnt in places but with a nice pan edge. No sauce but the mozzarella coated the base adequately and had melted into a luxurious satisfying gooeyness. Grilled chicken was in fairly small pieces but not bad taste wise. Mixed among this was strips of roasted red peppers, we would have liked slightly chunkier bits that were more succulent.

The Chopped garlic was coarse, and had a bit of a bite with a pungent flavor. The pesto drizzle zig zagged on top was nice and was suitably earthy and creamy. Dumped over the top was a bunch of arugula (some sort of kale type stuff) with a peppery, spicy flavor. So did it work as a combo, yes we reckon so just about, a different pizza and a bit of an acquired taste with some bitter overtones so not for all, but a satisfying eat nonetheless.