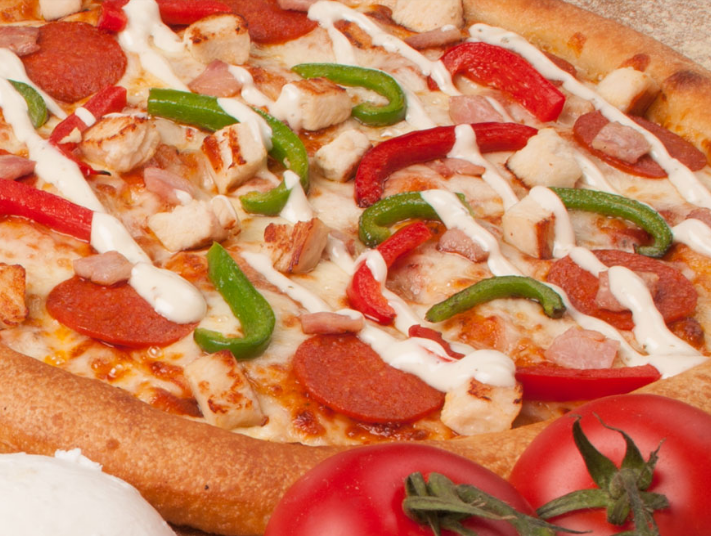 The lads were being forced to go to some wedding reception by the wives, Bills missus was good friends with the bride. We had a peak at the what food was on offer and it was just going to be things on sticks, sausages, pickled onions and cheese and pineapple! Oh man this was a low budget affair. The lads had devised a plan to get a decent pizza eat on the way, so had told the wives to go on ahead as we had to get some petrol (gas for our USA devotees) for the car.

So after 10 outfit changes and reassuring the wives that they looked perfect and no big bums were to be seen (it had to be done) they eventually departed. The lads threw on the all purpose suits which cover weddings, funerals, interviews, court appearances etc.

We headed to Pizza GoGo as it was not too far from the venue. We scanned the menu and still feeling that we could do without this party we thought we would punish all in breath range of us, so the Garlic Sizzler it was. The pizza duly appeared and we tucked in…

Appearance wise it looked liked what we thought, the base was a bit overcooked at the edge and the crust was a bit hard work to chew through, the dough taste was reasonable and seemed fresh. The cheese had toasted well on top and was nice and stringy. The tomato sauce was a bit bland and thankfully there wasn’t much of it. Onto the main toppings, the chicken seemed a bit processed but had toasted to decent brown on top and was acceptable. The bacon again seemed like reformed processed meat and was a bit ham like but OK. Pepperoni was in contrast a good variety, spicy and not too greasy. The Green and Red Peppers added some nice colour but didn’t really lift the pizza taste wise and the Garlic Sauce drizzle was obviously not fresh garlic, however it did taste reasonable, but the actual breath test will be later when we meet the wives. So we were not overly impressed with this offering and have had much better. Unfortunately Bill’s nerve cracked on the way to the wedding reception and he was eating extra strong mints like they were going out of fashion, but Ted stayed the course and his wife was very displeased with the pungent aroma, but after a few more drinks this was completely forgotten.

A average thumbs side ways from The Pizza Lads