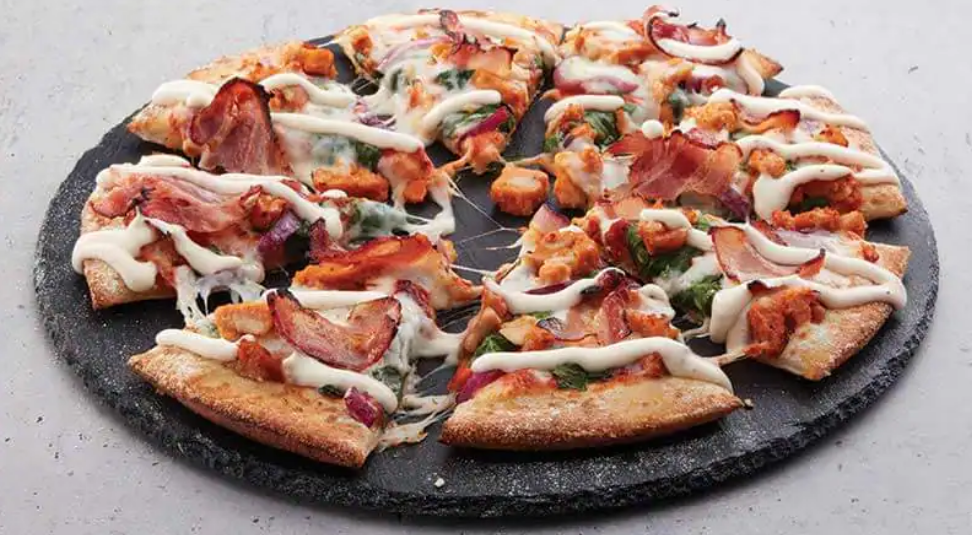 What we say
The lads are not big garlic fans so you ask why would we review a pretty garlicky pizza, But we are here to serve and a lot of folks like garlic, so here we go.

The Pizza took a while to be delivered and was only slightly warm but hey that’s life and as with most pizza , hot or cold they are still the best. It looked very good with a good base/topping ratio.

The base was the usual high Domino standard and had a nice crust and airy dough.Zesty Garlic sauce was a pungent sauce with the deep depth of garlic flavor and the tang of lemons and was very refreshing. Mozzarella was thickly topped and had a lovely gooey texture. The chicken was indeed succulent and was browned to perfection with large irregular chucks which the lads thought was certainly unprocessed unlike some others we have eaten.

Crispy bacon rashers were once again nice big pieces with a subtle taste. Spinach was well spinach and was a bit bitter .Red onion always adds to any pizza and goes particularly well with Garlic for some reason. It was all finished off with Garlic Parmesan Aioli and no we don’t know what aioli is either but we reckon it is a mayo based garlic dizzle and it certainly looks that way.

Did we like this combo , yes more than we suspected, bacon and chicken was magic the only topping we would lose would be the spinach.. Nice Stuff