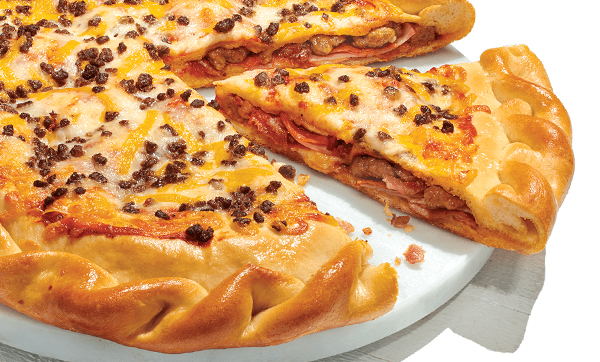 What is Take ‘N’ Bake Pizza?
Our Fresh Pizza. Your Oven. Not As Crazy As It Sounds.We make dough from scratch every day. We shred 100% mozzarella cheese from blocks — not poured from a bag. We chop fresh veggies by hand. It’s how you’d want to make the best pizza if you had all day to do it. For big appetites! Hearty recipes and two layers of our original crust. It’s loaded with toppings.

What we say
The lads are a lazy duo as our wives will agree and prefer someone else to do the cooking for us but we were intrigued by the take and bake pizza at Papa Murphy’s. We felt that our oven just wouldn’t give the same result as a dedicated pizza oven but we were willing to try.

We chose the five meat stuffed as it looked enticing, though to be honest it seems more like a pie than a pizza but at least the toppings don’t end up unevenly spread as it’s all encased in base. Upon first glance we were very hopeful as it looks lovely with a nice artisan style crust. So in the oven it went and it took 40 minutes, a hell of a long time compared to some supermarket ones. Upon completion we were suitably impressed, it was all well cooked but not overly so, and it looked lovely, beautiful golden brown with oozing cheese on top. So we cut in and removed a slice each, the pizza crust was not hard and held together really well. The pizza was of course double crust and the variety of meats “stuffed” inside was a great combo. The Canadian bacon was smoky almost ham like in texture, along with high quality pepperoni with it’s deep spicy flavor. Sausage was suitably meaty and the crispy bacon added more salty smokiness, the sauce was just fine and dandy and with the extra cheese on top and a scattering of ground beef it finished things off nicely.

How does it fair then ,well we suspected that we were not going to like this as we thought our cooking skills were below par but it was foolproof by following the instructions. The end result was pretty amazing with a good meat combo and really tasty fluffy crusts and dough.

We liked this a tremendous amount and we don’t say that lightly!