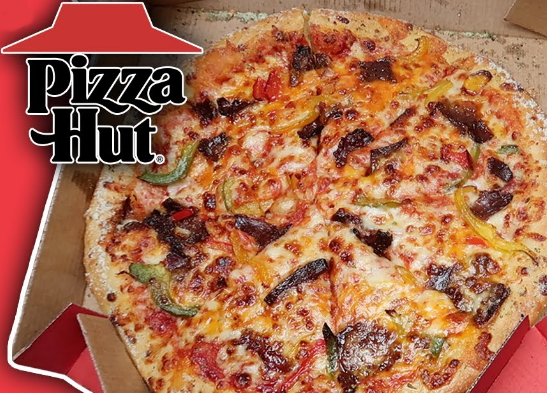 Like it Hot? Filthy Steak Fajita Pizza – topped with slices of fajita spiced beef steak with triple cheese blend, and finished off with crunchy and flavoursome mixed peppers.
Pizza Hut Filthy Steak Pizza Review
The lads were still having to do separate pizza reviews and we decided that today’s target is the Filthy Steak Pizza from Pizza Hut, a new variety that is part of the Mexican Range. We chose this one because as befits our childish ways we thought the name sounded funny, we have had our fair share of filthy pizzas before (mentioning no names) but never one that admits it is.
Take it away Bill
Right, we stayed with the classic crust offering while it looked lovely with the tempting brown hue on the edge i’m not a big fan of Pizza Hut bases and it seemed too crispy on the edge . The pizza itself looked a bit sub par because the filthy steak gives the impression it’s been slightly burnt and the peppers seemed a bit underwhelming . But hey who cares about the look, it’s the taste that counts. Base was OK apart from edge and tasted reasonable and was at least soft where it needed to be, Sauce OK, triple cheese mix is very appealing to me and was an indulgent chewy satisfying bite . The description says “like it hot” but it wasn’t mind blowing and compared to some fairly mild which suits many .The filthy steak was not too bad, nice taste but a bit chewier than i would have wanted. The mixed peppers and Jalapeños combined well with the steak .. So from me, an OK pizza but not my favourite.
Over to you Bill
I personally liked the crust and the texture was just right for me. Points of agreement with Bill are the base and triple cheese mix, but i have to disagree again ( i think i’m becoming more like the wife !) and i really liked the steak. A great taste and something different and i didn’t find it chewy and like Bill says combines well with the peppers and Jalapeños. For me a nice guest pizza though would not choose over other offerings.
A half hearted thumbs up from the lads.