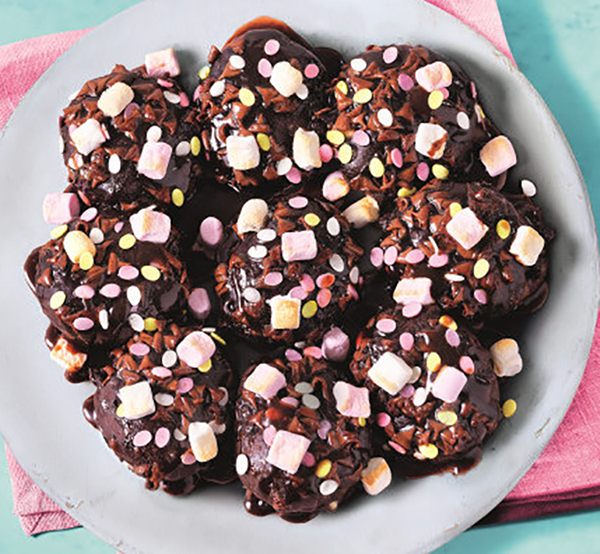 Chocolate flavoured balls of dough with milk and white chocolate chunks, milk chocolate curls, mini marshmallows and chocolate sauce with sprinkles. Pop it in the oven for just five minutes and you’ll have a delicious, gooey, chocolatey treat.

The lads were once again on child minding duties as it was the Easter holidays, so at our wits end we decided to share the pain with the good folks at our local supermarket Asda. We let them go on the rampage while we explored the fresh pizza counter. To our surprise we found that they were doing a Easter Chocolate Dough Ball Pizza! Now it really seemed like a cake to the lads and would have thought it would be on the bakery counter but that’s just us. So anyway in the basket it went and off we trotted.

It says it can be eaten hot or cold but we like our pizzas like we like our women, hot and fresh ! but maybe not as sticky as this concoction was. right moving on.

It only takes five minutes and was even gooier when it came out. So as you see it looks like a bunch of profiteroles glued together with chocolate sauce. The topping was Marshmallows, it’s a wonder that Asda hadn’t given the option to add more toppings like chilli beef or pineapple. But it is what it is.

So you ask what was it like. It smelled of chocolate obviously, the dough was a bit crusty and dense we felt and tasted of chocolate. The sauce was like a chocolate desert but that was nice we reckoned. And the marshmallows were marshmallowy. So as a pizza offering it sucked, as a cake it was okay, a bit rich and sickly and the amount of sugar in it could have sustained an everest expedition on it’s own.