What they say
San Francisco style sourdough with an Italian soul. Hand-stretched topped with Pepperoni and mozzarella

What we say
Simple pizzas can often be the best as long as the few toppings are of superior quality. Often loads of toppings can cancel and overpower others and it usually ends up with being the hottest / spiciest toppings taking the limelight. So the lads went back to basics and apart from a margherita the pepperoni is the simplest. So our mates at Frankies would have their chance to impress us.

First off it was hot and looked lovely, pepperoni is of course THE classic topping for good reason, its the perfect taste experience.

The sourdough base is thin and and best eaten with knife and fork. It was tasty and flavourful and edges were chewy and satisfying. The tomato sauce was generous and one of the better ones of the big pizza chains. Mozzarella cheese was not too thick but very toasted on top and not too stringy or gooey, taste was very acceptable. The pepperoni hits all the right notes: meaty, spicy, a little sour, and chewy, with a paprika bite and we felt it was a fine grind of cured pork and beef. Lush

A Thumbs up from The Pizza Lads… 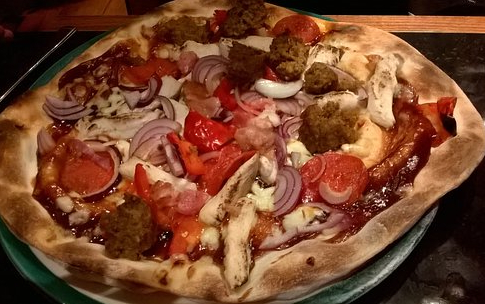 What we say
The lads were finally free to go out and enjoy a pizza after the latest lockdown so we decided to visit Frankie and Bennys. Obviously things were not as straightforward as they used to be but the staff made things as hassle free as possible.

We had a look at the menu and the range was not too extensive at the moment but what they offered seemed enticing. The New York Giant seemed to be made for our tastes and so that was for us!

The chain only seems to offer the one base variety which is the San Francisco style sourdough and has that characteristically tangy flavour profile. To be honest we probably wouldn’t have chosen this by choice as Ted is not a sourdough fan but it was very acceptable with a definite hand stretched look and nicely browned edges, not too doughy and not sloppy. The overall presentation was mouthwatering and the toppings were liberally applied which pleases the lads. The bbq sauce was sweet and rich with a tinge of tanginess ,also it was applied generously. Mozzerella was pretty good, tasty and luxurious. The pork & beef meatballs were juicy and tender and hit the spot. The chicken was in fairly large chunks and were excellent.

The ham on the other hand seemed to be lost on our pizza , in evidence yes but not standing out. Pepperoni was spicy and deeply satisfying. Bills a big fan of roasted peppers and the roasted red pepper on this pizza was smooth and juicy. It was all topped off with a fair amount of red onion which provided a nice contrast to the meat toppings.

So after the delay in reviews due to the lockdown this was a perfect restart to our reviewing adventures.

A recommended pizza that we suggest you seek out and try. Thumbs up… 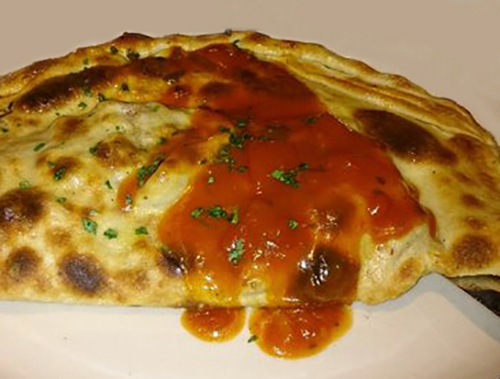 The Pizza Lads were having a Pizza policy business conference debate brainstorming session between themselves. Bill said that it is our duty to bring every aspect of the Pizza world to our followers eyes, and that we don’t seem to have done any Calzone reviews. Ted was disbelieving but it was true!

So without further ado, we hurried off to rectify this situation. Now as our expert followers know, that a Calzone is basically a folded Pizza and according to Wikipedia, an interesting fact is that “In Italy, Calzones are popularly believed to be the most efficient type of Pizza for home delivery. This popular credence has some scientific ground as the folded nature of the Calzone results in a lower surface-to-volume ratio than a traditional Pizza resulting in better heat retention during the journey from the Pizzeria to the buyer’s home. This results in a Calzone being delivered warmer than Pizza all things equal. Ohh Err, still makes sense and Ted remembers one notable Pizza chain delivery Pizza that ended up somehow folding itself into a Calzone and he reckoned it was all the better for it!

Anyway were losing the plot. Off to Frankie and Benny’s we went as the big chains rarely offer Calzone. The offering looked like a huge Cornish pasty and with a nice charred bubbled look. The Dough was nice and chewy with a slightly crisp edge. The Meatballs were fresh tasting and delicious with a hint of seasoning. The Pepperoni had a good bite but wasn’t overwhelming the other ingredients. The Chicken added a diverse twist and was tender. Red Onion, red Pepper, Mozzarella and BBQ sauce completed the line up, although we felt that the red Onion was not required really, but the red Pepper was lovely. The Cheese was pretty cheesy indeed and the BBQ sauce was smoky tasting.

So a really nice dish and the overall combination was a winner..

A big “Calzone” thumbs up from The Pizza Lads 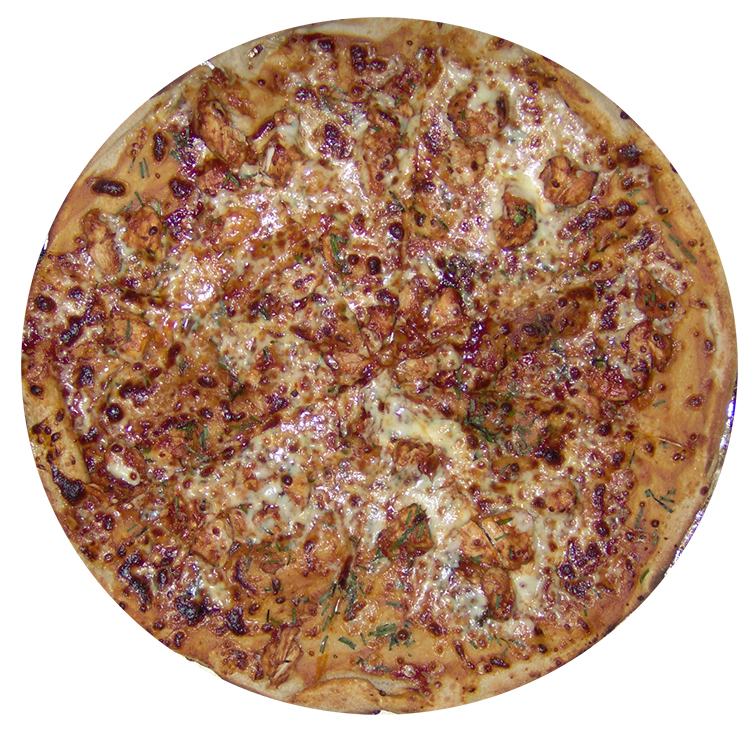 The lads had had lots of feedback from the website and whilst all favourable, one person commented that the bulk of our reviews are of Domino’s, Papa John’s and Pizza Hut. Now we were really angry about this (not lol), but we get the point although in our defence the big Pizza chains are the ones that most people go to for Pizza. But hey we are nothing if not adaptable (which has been a great help considering our missuses), so we decided to broaden our horizons. We realised that Frankie and Benny’s offer a wide Pizza range and so off we went.

The restaurant was pretty busy so we feared that we may have a long wait. Scanning the menu we decided on the BBQ Chicken Pizza, always a winning combo. We did have a bit of wait but when it arrived at our table it was still good and hot. The look of it was a bit dull and brown in our opinion but obviously the taste is what matters. The Pizza base was nice with a crispy chewy texture and the toppings were virtually edge to edge. The BBQ sauce was pleasant and tangy. The Cheese had been nicely toasted and was stringy and thick with a mouth watering aroma. The slices of Chicken were small but tender and juicy with a pronounced flavour. It was topped off with some Chives which brought out all the other flavours.

So a good solid offering that delivered, would we have changed anything? maybe some bacon! but that’s just us.